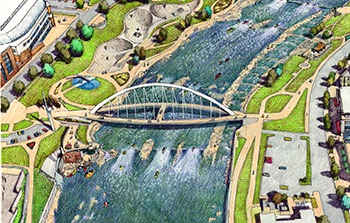 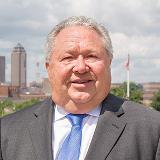 Water Trails: What This Means for Des Moines

The Water Trails Project in Des Moines is moving full steam ahead thanks to a multitude of organizations who are committed to rejuvenating and reconfiguring how we look and use Iowa's rivers. Right now, much of the region's waterways are not user-friendly, especially in downtown Des Moines where three dangerous dams haunt kayakers and canoers who would like to float from Saylorville all the way to Lake Red Rock.

The Dam Plan has been in the works for three years now.  In 2016, I was honored to become the Steering Committee chairman. Over the course of the last two years, public input from the Dam Debate and ongoing research has shown this project may be exactly what Des Moines needs to compete nationwide. In spring of 2018, a price tag was announced: $117 million, broken down by each project, jurisdiction with heavy input from private and public partnerships.

The plan proposes recreating 150 miles of Iowa's rivers and streams and creating 86-plus entryways, exits, water features and other uses to increase fisheries and wildlife habitats. The dangerous dams in downtown would be mitigated and recreated to have whitewater rafting, kayaking and even surfing features incorporated to draw tourists and national water sports competitions. Throughout the projects, water quality testing technology will also be installed so Iowa can continue to better the quality of our rivers and streams.

Of course, one of the largest proponents for Hubbell Realty's involvement is the attraction and retention of a dedicated workforce. With a low unemployment rate of 2.7 percent in Iowa, we are consistently in battle with other cities and states across the nation who are pushing the envelope on developments and attractions. Young people are choosing where to move before they ever secure a job. To bring in a fresh workforce and tourists means a boom for our local economy. According to the latest studies, Iowa outdoor recreation generates:

This project could be the catalyst for young people to choose Central Iowa. That's why on October 18, 2018 Hubbell Realty announced the donation of $1 million to Water Trails over the course of a five-year period in hopes to kick start the needed fundraising.  We are extremely excited to see this project catapulting forward and we expect others to jump on board shortly.