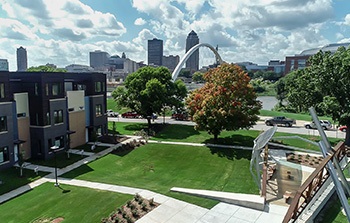 This year, the downtown landscape will undergo even more changes than witnessed in years past.

The biggest change people are bound to notice is at Gray’s Station.

On January 2, Hubbell Realty Company started construction on the Gray’s Station pedestrian bridge, crossing over the Raccoon River. The bridge will connect to downtown Des Moines, the existing trails along Gray’s Lake and will also lead to the brand-new Water Works Park tunnel connection. The bridge design mimics the current Gray’s Lake bridge with colorful up lighting at dusk and will have handicap accessibility features. The work is expected to continue until mid-summer when the bridge will officially open.

We will also continue the bike trail to the north, winding throughout the Gray’s Station neighborhood until reaching MLK Jr. Parkway. The trail will flow past the City of Des Moines’ wetland basin project that will serve two purposes:

Both are expected to be finished in 2019.

The Linc apartments, as well as the first phase of Gray’s Station townhomes will begin construction the spring and extend into early 2020. Linc will feature a community pool, dog park, modern apartments and a food hall along MLK. This phase will feature 11 for-sale townhome varieties including different floor plans and interior choices from Hubbell’s Downtown Design Studio, which will open later this year.

The East Village continues to erupt with new breweries, pop-up storefronts and additional housing. That also rings true for the Bridge District to the north, which will continue with its' popular townhome concept, The Banks. In addition to Verve and Velocity, the neighborhood is adding a third apartment community to the north overlooking the Botanical Garden and Des Moines River.

Another noticeable effort going on along, and in, the rivers is the Water Trails and Greenways Master Plan. In October 2018, our company announced a donation of $1 million over the course of five years to the project. The Water Trails effort aims at mitigating and transforming the three downtown dams into safer and more recreational water features for kayaking, whitewater rafting and even surfing. The plan also includes adding 80+ water entry features around Central Iowa in more than 15 communities in addition to creating water monitoring systems and addressing safety and water quality initiatives.

Also along the river is the Des Moines Skatepark. This park will feature a 65,000-square-foot skatepark, pedestrian walk, main plaza as well as an interactive and “skateable” sculpture reading WOW, all overlooking the riverfront. This park is expected to draw thousands of visitors and potentially national competitions.

The face of downtown Des Moines is ever changing and the possible construction of the two towers over the course of the next half a decade will change the skyline even more.