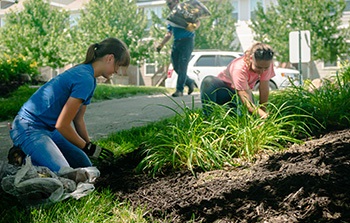 Face and Figures of Homeowner's Associations

Homeowners associations are on the rise in the United States, but there are many misconceptions about what a HOA is, why they were created and how homeowners benefit from living in one.

Homeowners associations have a long history in the United States, dating all the way back to the mid-19th century. However, many experts point to the Clean Water Act of 1977 as a catalyst for the rapid growth of HOA's around the country that continues today.
The Clean Water Act was originally passed in 1972 in an effort to overhaul water quality standards at the federal level. The then brand new Environmental Protection Agency (EPA) was tasked with implementing and enforcing measures to reduce water pollution, a responsibility that had previously been left to the states and was often neglected.
In 1977, an amendment to the Clean Water Act required all new real estate developments to detain stormwater so that flow to adjoining properties was no greater than the pre-development runoff. This meant residential neighborhoods had to include detention areas to hold excess stormwater (see our largest yet at Gray's Station in downtown Des Moines). These detention ponds often served multiple homes at once, making them a shared common area. Thus, developers had reason to establish an HOA to maintain the shared space. Since then, the scope of an association has expanded to include the management of things such as landscaping and other maintenance responsibilities.

According to iProperty Management, an estimated 70 million Americans lived in homeowners associations in 2019, which accounts for 24 percent of the U.S. population. More than 347,000 neighborhoods are governed by associations, helping to preserve property values and maintain the appearance and safety of communities across the country.
The states with the highest amount of HOA's, unsurprisingly, are Florida and California.

What to expect...
Frequent Communication: A good HOA keeps homeowners informed about neighborhood happenings and association business. Through regular updates and timely follow-up to questions or issues, residents come to trust that the HOA has their best interests in mind. Conversely, it is important for homeowners to develop constructive communication strategies with the association to maintain a strong, productive relationship.
Economies of Scale: By working with a professional management company, an HOA can utilize that company's relationships with various vendors to implement routine upkeep and other maintenance services at a competitive cost. Homeowners can rest assured their dues are being used efficiently and responsibly, and work will be completed in a timely fashion by professionals.
Value-Added Solutions: At the most basic level, a community association is tasked with managing budgets and maintaining common spaces. However, the HOAs that go above and beyond are those that offer value to homeowners outside of the services outlined in a management agreement. Examples include community-building events and activities and a rewards program that connects homeowners to deals with local businesses.
With 50 neighborhood associations and more than 5,000 homes in its portfolio, Hubbell Community Management has a presence in nearly every community in central Iowa. If you have any questions or would like to learn more about HCM, contact us!
SUBSCRIBE TO OUR BLOG!
Topics: HOA, home builders, home preparedness, homebuilder, homeowners association, Hubbell, Hubbell Homes, irrigation system, lawn care, mowing
PREVIOUS POST
ALL POSTS
NEXT POST