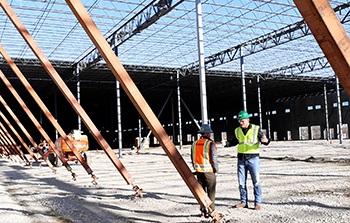 Iowa December winds are blowing frigid air outside as Casey Port surveys the progress of the Crosswinds II Business Park near Corporate Woods in Ankeny. The footings, walls, and joists are up, and the roofing deck is more than halfway complete as the Vice President of Hubbell Construction Services oversees this 227,000 square foot warehouse.

“As you look around the metro, you see this industrial boom everywhere. Warehouses going up everywhere. It has created demand, which is a good thing,” says Port.

“There are a lot of unknown factors and all we can do is keep communicating and staying ahead of the issues the best you can. But again, this still has the potential to be a good run of work and I do hold out optimism that these new timelines will help some things,” says Petersen, whose company supplies builders like Hubbell Construction Services with steel and precast.

The steel market volatility soared cost increases in 2021. “The pricing of the joist and deck if a year ago was flat. We have now a 300% increase. Your other members, the tube-shape columns and W-shaped girders, those types of elements we have seen price increases usually in about the 50% range," Petersen said.

Port says planning ahead and communication is how to deal with this volatility. “As a developer, we've got a multifamily project named LEVEL not too far from here we are working on together, and it has forced us to make decisions earlier, buy precast, order steel earlier.”

And steel availability means Petersen is committing to longer lead times, which is becoming the new reality in today’s market.

“We are making commitments 10 to 12 months in advance. Which sounds great, but it can be tough to navigate. How do you make sure you pick the right projects and how to make sure you are not picking up too much work to where you are alienating an important client?" he said. "But the good news is that people have become more comfortable with the pricing, which has calmed down a little bit.”

A short drive down I-235  is LEVEL, Hubbell’s newest multifamily project in the Bridge District in downtown Des Moines, which is well underway. PDM Precast completes the walls for this project as enormous slabs of formed concrete precast. A giant crane lifts the first walls vertical from the massive flatbed for the beginning of a five-story elevator shaft.

“For precast, the impact has been a little more subtle,” says Petersen. “The pricing has been more expensive. If you asked me a year over year it would be in the 15% range, which is a little odd. Usually, it goes at the same as inflation or cost of living. So this has been a dramatic change, but not as dramatic as steel.”

Petersen says he needs more workers to stay ahead of his precast commitments. “That labor component has been difficult for construction in general. To get the quantity of labor and quality of labor it’s been tough. And the uncertainty of COVID-19 affected a lot of folks. The build-back has been slow. And it’s really only the last month or so that we feel like we’re over that hump, creating that certainty with our clients and it all starts with the labor for us.”

Port says preparation has also led to procuring materials in advance to ensure they are available when projects begin.

“We are used to making phone calls and working with our contractors rather quickly, but that’s not the case today. It takes a lot more planning. And it’s always the weirdest things like the roofing fasteners are hard to get. The roofing membrane not so much, but the fasteners are one of the hardest things to get and it’s one of those things that’s caused a problem for us," Port said. "The other thing is warehousing. This project at LEVEL, we bought plumbing fixtures eight months ago and they are in a warehouse in Des Moines. We needed to take delivery of them because of price increases and we are finding we have to do that and plan for that with this and other projects as well.”

Inventory is also a concern for the suppliers like PDM Precast.

“And that will affect your cash flow,” says Petersen. “It’s going to affect when you make decisions. In our world with all the little parts in the precast world, it’s not just cost increases, it’s straight-up availability and when your goal is to create certainty, we are going to do things we’ve never considered. Where before we had one to three months out, now we need three to six months out, which doubles the space for the components which you wouldn’t think is a big deal, but it can get there.”

Through all this, Petersen says he has reason to be positive going into 2022.

“The optimist in me thinks it actually might help some things, forcing us to preplan and procure materials ahead of time. God forbid it might help projects run smoother. I am almost hopeful for a silver lining in this and no matter we look forward to it,” says Petersen. “As long as that labor piece is going down the right path, we are optimistic.”

The Crosswinds II warehouse building near Ankeny will be complete in early 2022, and the apartment community LEVEL, which will be managed by Indigo Living, should be complete by 2023.

Steel Pricing Volatility and What's Ahead in 2022

Precast Pricing, Labor Shortages, and What's Ahead in 2022