AT HUBBELL REALTY COMPANY, OUR MISSION IS TO
BE THE LEADING PROVIDER OF REAL ESTATE
SOLUTIONS, TODAY AND TOMORROW. 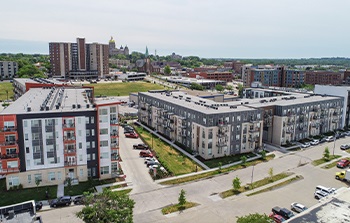 Apartment construction has slowed after a five-year boom resulted in more than 10,000 new units in the Des Moines metro.

In a drastic change of pace, no new apartment units opened in the first quarter of the year, according to figures released last week by CBRE|Hubbell Commercial, which tracks the market. The slowdown is part of a normal market cycle, market analysts say: With so many apartments coming online, developers are taking a natural pause to fill vacancies, which reached a high at the beginning of 2020.