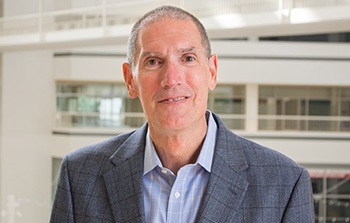 “We first approached John in 2002 about holding a stair climb event at the building he managed, 801 Grand. The first Iowa stair climb was held in February of 2003 where 157 people climbed the stairwell at 801 Grand and raised a total of $6,000,” said Micki Sandquist, executive director of the Lung Association. “Over the years, the climb has changed from being a one-building climb, to a three-building, and now to a four-building climb. This year, our climb raised more than $340,000. John’s leadership, guidance, and connections were there through all of the changes and its tremendous success. He is key in connecting with the right people, attending meetings and making those critical ‘asks.’”

In his time volunteering for the Lung Association, Bergman has also:

“Congratulations John and thank you so much for all that you continue to do and have done for the American Lung Association,” said Sandquist.

This award is named after Opal Fagle of Marshalltown, Iowa in honor of her over 30 years of service to the Lung Association. Throughout Fagle’s career as a nurse with the Marshalltown School System, she had the most successful “I’ll Never Smoke” program in the state involving students teaching students about the dangers of smoking. Opal began serving on the Board of Directors in 1979, and promoted Lung Association programs not only in her local area but to her educational contacts throughout the state. Her husband, David Fagle, served on the Local Leadership Board until his passing last year.