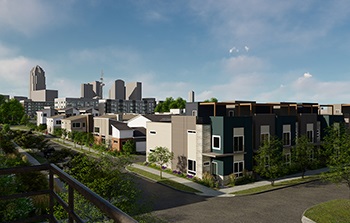 Hubbell Homes has started building the first round of townhomes within the Gray’s Station community in downtown Des Moines.

The first 27 townhomes will be constructed in a variety of seven floorplans, all showcasing various options which homeowners can choose from when living in this new neighborhood. A total of 79 townhomes will be built in the first phase. The various floorplans and exterior illustrations were revealed to a first-round list of more than 200 potential homeowners who have shown interest in building in the location for more than a year.

“We’ve had so much buzz around this community and a ton of excitement surrounding when the first homes would start. We’re proud to say we’ve already had six home reservations,” said Rachel Flint, Vice President of Hubbell Homes. “Of course, we had to work around Mother Nature and some weather-related setbacks, but what we saw at our initial reveal truly shows how much interest is in Gray’s Station.”

Hubbell Homes’ townhomes at Gray’s Station feature selections from a newly released ‘Urban Collection’ with high-end finishes in a variety of price points all curated by the in-house Design Studio team. This collection allows homeowners to choose different interior colors, finishes and customization options while creating their townhome. The homes, dependent on finishes and square footage, range from 1,800 to 3,000 square feet and start in the $300’s and up. The individual lists can be found on hubbellhomes.com

“These homes will really have a different look and feel about them and that’s what makes starting this process so much fun. We’re excited for this community to really start taking shape,” said Flint.

Hubbell continues to make progress on Linc, an apartment community to the north of Gray’s Station, as well as working with prospects for the lower-level commercial space which faces MLK Jr. Parkway. Linc is expected to be done in early-to-mid 2020.

Hubbell will also be constructing for-sale condominiums which will face Gray’s Lake and overlook the city’s wetland basin. With this great variety of housing, homeowners and renters will be able to enter the neighborhood at a variety of price points and explore multiple rental and ownership options.

The Gray’s Station pedestrian bridge, trail and wetland basin are currently under construction with expected completion dates of mid-to-late fall of 2019. The bridge, which had trusses installed in late July, will serve as a connector from downtown Des Moines and Gray’s Station to the Gray’s Lake and Water Works Park areas.