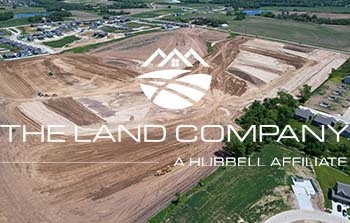 Omaha, NE – The Land Company, formerly Boyer Young Land Development, has rebranded and unveiled a new name this week. The Land Company, which has been in operation for more than 20 years in the Greater Omaha area, operates in 22 subdivisions and has developed over 5,000 homesites in areas such as Papillion, Gretna, Fremont, Bennington, and other metro suburbs. Working alongside its homebuilding partner, The Home Company, The Land Company is currently developing 10 different subdivisions.

“The name change signifies an evolution of business practices and leadership, as well as welcoming new ideas and perspectives from the experienced team we’ve built,” said Dave Vogtman, Vice President of Omaha Operations, which includes The Home Company, The Land Company and Premier Land Title Company. “The Land Company is entering into new relationships with local leaders, developers and builders while exploring land development ventures in commercial, multifamily and industrial sectors in addition to homebuilding.”

As an added focus, The Land Company is developing home lots outside of the standard single-family sizing to accommodate new products that customers and clients are now demanding, such as brownstones and narrow format lots.

“We’re excited to explore new opportunities and communities with these new partnerships. We will be developing in Elkhorn, a location we have not operated in for more than a decade,” said Vogtman. “The name has changed, but the dedication to our partners and customers has not – we are devoted to being the best and most reliable land development companies in Nebraska.”

The Land Company is a Hubbell affiliate, based out of West Des Moines, IA. Learn more about The Land Company here: https://www.boyeryoung.com
SHARE
PREVIOUS POST
ALL POSTS
NEXT POST