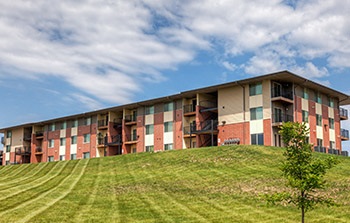 Des Moines, IA – Hubbell Realty Company has completed the last phase of the Melbourne apartments, near Ewing Park on Des Moines’ south side.

The $11 million phase included two buildings which each have 36 apartment homes, for a total of 72 units. While the first building is fully occupied, Hubbell is now leasing for the second building which will be open this February. These 1- and 2-bedroom apartments are designated for residents who are 55-year-old and above and have in-home washer and dryer units with monthly rental rates starting at $545.

“These affordable apartment homes have been extremely well-received from residents looking to stay and work near downtown Des Moines,” said Darcy Valline, Vice President of Hubbell Apartment Living. “We currently have a majority of the first building occupied or leased and we're hoping for the same reaction once we open the second building later this winter."

In addition to the homes, free internet is also provided on-site as well as a fitness room in each building, equipped with cardio machines, weights and other gym equipment. There is also a community clubhouse, business center and splash pad which was built into the first phases of the community. Melbourne is also within walking distance to Lovejoy Elementary and McCombs Middle School.